Książki w obcych językachYour Life Is Worth Mine. How Polish Nuns in World War II Saved Hundreds of Jewish Lives in German-Occupied Poland, 1939-1945 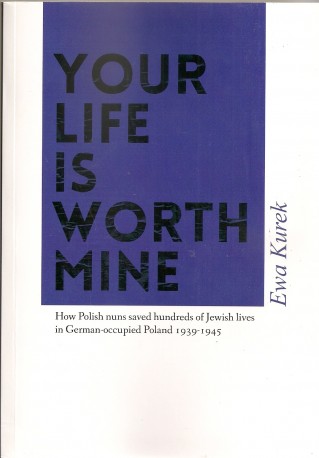 Your Life Is Worth Mine. How Polish Nuns in World War II Saved Hundreds of Jewish Lives in German-Occupied Poland, 1939-1945

Polish nuns in nearly 200 religious institutions saved over 1200 Jewish children between 1939 and 1945. In this text, the author has reconstructed the history of these rescues through extensive interviews with both the nuns and many of the children they saved.

For the first two years of the German occupation of Poland in World War II, Hitler's policy was to suppress all potential Polish resistance by indiscriminate killing and deportations. Although the Jewish population was forced to wear the Star of David and to move into ghettos, it generally escaped the worst of the terror meted out to the Christian Poles. After the attack on the Soviet Union in June 1941, however, a systematic killing of the Polish Jews began; and by the end of the war, three million Polish Jews had perished at the hands of the Germans.
Three million Christian Poles had also lost their lives. Non-Jewish Poles were warned that any aid or shelter they provided to the Jews would be punished by an automatic sentence of death. Only in Poland did the Germans carry out their threat to kill entire families caught helping the Jews. A partial post-war record lists 704 names of Poles executed for helping Jews. Over 4,500 Polish names appear on the roll at Yad Vashem of Righteous Gentiles who saved Jews - by far the largest national group to be so honored.
Defying German orders, and risking their lives, thousands of Poles did save Jewish lives. Among the most effective of these rescuers were the female Catholic religious orders. Polish nuns, in nearly 200 religious institutions, including schools and orphanages, saved over 1200 Jewish children. These children arrived at the convents and orphanages in many different ways; some were brought by desperate relatives, family friends, or members of the underground; others were found wandering the streets; still others were abandoned at doorsteps. When taking in these children, the nuns had to weight the risk to themselves and the other children - to decide that the lives of the children were worth their own